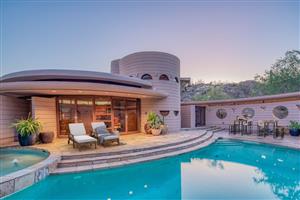 Frank Lloyd Wright’s Last Home Goes up For Auction By Nancy A. Ruhling | Originally Published On September 25, 2019 | Mansion Global The 3,095-square-foot Phoenix estate was last listed for $2.65 million Frank Lloyd Wright’s legendary Circular Sun House in Phoenix, the last residence he designed, will be sold at a live, on-site unreserved auction on Oct. 16. The estate, which has been on and off the market since 2016, was originally priced at $3.6 million. It is currently listed for $2.65 million with The Agency. It will be auctioned by Dallas-based Heritage Auctions, which announced the sale on Sept. 5.

It is currently listed for $2.65 million with The Agency, which put it on the market about two years ago, listing agent Jack Luciano said. It will be auctioned by Dallas-based Heritage Auctions, which announced the sale on Sept. 5.

“It’s one of only 14 circular homes Wright designed,” Mr. Luciano said. “And it’s only had two owners, which is unheard of with Frank Lloyd Wright homes. I hope it goes to a buyer who appreciates and understands Wright’s designs.”

According to property records, Linda Melton, who was only the second owner, bought the property in 1994 for $500,000. Melton, who was the owner, records keeper and billing agent of several telephone companies in the United States, died in 2011. Nate Schar, director of real estate for Heritage Auctions, said Melton’s two daughters have been the owners of the property since her death.

“They love the house, which is why have held onto it for eight years,” he said. “But they feel it is time for closure.”

Although the daughters have never lived on the property, they have maintained it, and in recent years it has been used occasionally as a venue for political fundraisers and for other events, Mr. Schar said. The 3,095-square-foot house, which is on 1.3 acres on the edge of the Phoenix Mountains Preserve, was designed by Wright before his death in 1959 for Norman and Aimee Lykes and was built by his apprentice, John Rattenbury, in 1967.

After Melton bought the property, she hired Mr. Rattenbury to convert the five bedrooms, some of which were only closet-sized, to three; the plans were approved by Wright’s foundation. “It’s a collectible piece of real estate, a priceless piece of art,” Mr. Schar said. “It’s timeless, and it’s still incredibly livable. Best of all is that you can view the Biltmore hotel and shopping district from the living room. You can see 50 to 100 miles on a clear day, and the design keeps the sun out. They don’t build them this way anymore.”

The house, which is made of concrete blocks that were colored to blend with the surrounding boulders, is being sold with its Mid-Century Modern furnishings, which Mr. Schar said include six of Wright’s Origami chairs.

The property, which overlooks the Palm Canyon, has a gated driveway, a pool on the garden terrace that is lined with mother of pearl, a two-vehicle carport with a covered walkway to the house and a master suite with a balcony. The interior, which features built-ins, is made of Philippine mahogany.

Circular Sun House was designed right before the opening of Wright’s Guggenheim Museum, which also plays with the possibilities of circles.

Mr. Luciano noted that the fireplace in the home’s great room has a rounded profile that resembles that of the Guggenheim’s iconic staircase.

The auction was first reported by Curbed.